After 2 rounds of racing at DTR it’s time to see who did well and who had a false start.

First let’s start with the best drivers out there. Unfortunately due to holidays not all giants were able to showcase themselves yet, but round 1 at Albert Park was quite a show. Or should I say, a massacre? It started off with a electrifying battle for pole between the two Austrians of Simsidanger, Vienna en Lithuanian driver Justasas. There were only 11 thousands between p1 and p3, with Simsi scoring his first pole position. Championship candidate Shaby2K was flying out of the blocks, but flew so hard he crashed and had to start last.

During the race however, is where the real trouble came. Not just for Shaby, but one by one they nearly all went off. Although one by one, the safety car restart midway through the race didn’t go very well for ZeyroAK and he took five others cars with him. The rest of the race just showed a lot of similarity with the 1996 Monaco Grand Prix where only 4 cars finished and Oliver Panis took his only career win in a Ligier. The four finishers is where the similarity stops however, because Justasas won and I can tell you already this will not be his only career win. This driver is a phenomenon. Petr_Vole, Brent and Fruitful were the only drivers finishing the race.

In round 2 at Suzuka Shaby was able to put up a fight for pole, but in the rainy session he lost out on just 3 hundreds of a second to race 1 winner, Justasas. In the race he had much more trouble to keep the car on track as he lost it a few times, but was able to get his first points of the season with a fourth place. The podium was filled with iiBbEeNnii and Blaackmamba who both did a great job getting their first ever podium at DTR, but were never really able to put pressure on Justasas, who took his second race win in a row. His McLaren teammate Vienna once again did not finish the race, just like the Red Bull duo of Tikkuhd and Kasel, who are hoping to change this in the next round. Helmut Marko already stated recently “i can’t have 2 Albon’s in the car, we need points on the table”.

The points table right now in Class A: 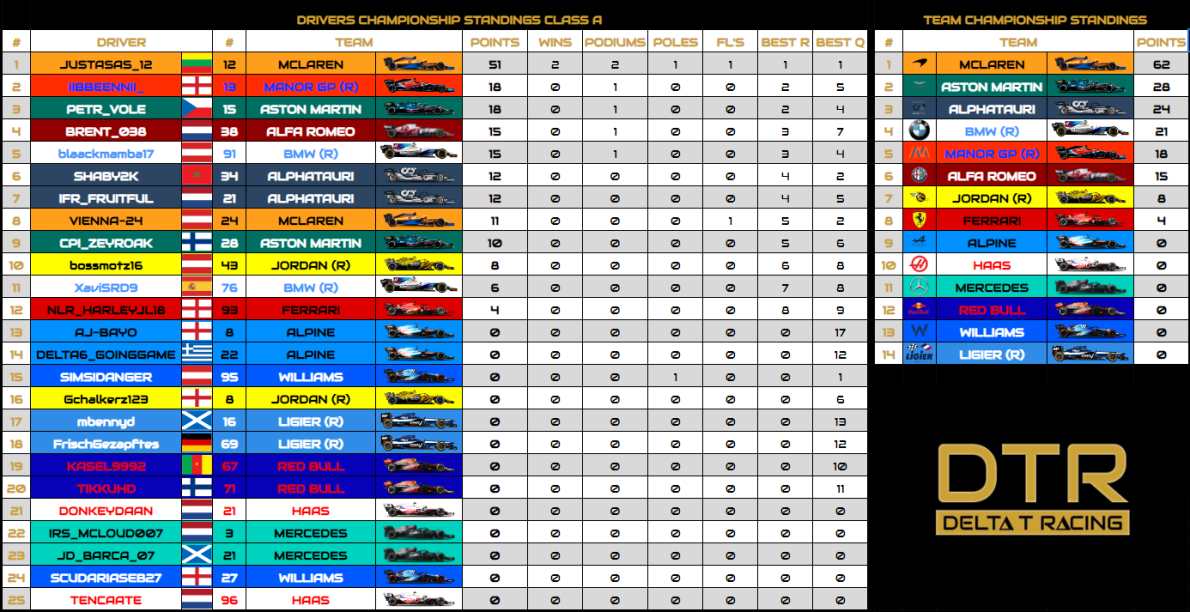 In the second tier of DTR there was a fight in Australia between three Ferrari powered teams for pole positions. Bossmotz in the Haas eventually took pole ahead of Wesley in a Ferrari. In an exciting race that had multiple safety car periods it started raining midway through and that’s where Aston Martin driver Jetfish showed his true self. He overtook car after car and brought home the win for the Silverstone based team. The podium was completed by both Alfa Romeo drivers Bruma and GChalkerz, while front row starters Bossmotz and Wesley had a race full of incidents and just managed to get to 4th and 5th.

At Suzuka the grid looked a bit different with xxMichaelxx and XMissil making their debut. They started on the front row and in the race it seemed like XMissil was going to win in his McLaren. However, a late safety car changed everything. When XMissil decided to pit for fresh soft tyres with just a few laps to go he lost his leading position to Wesley and Bruma. The latter two decided not to pit under yellow and took track position over fresh tyres. After the restart XMissil and Bruma had a tough battle with some contact here and there, but the Swiss-Brazilian managed to hold off the Danish Missil, which gave Wesley his first ever win in DTR. The winner of the previous race, Jetfish wasn’t very lucky and only managed to get 11th.

The points table now in Class B 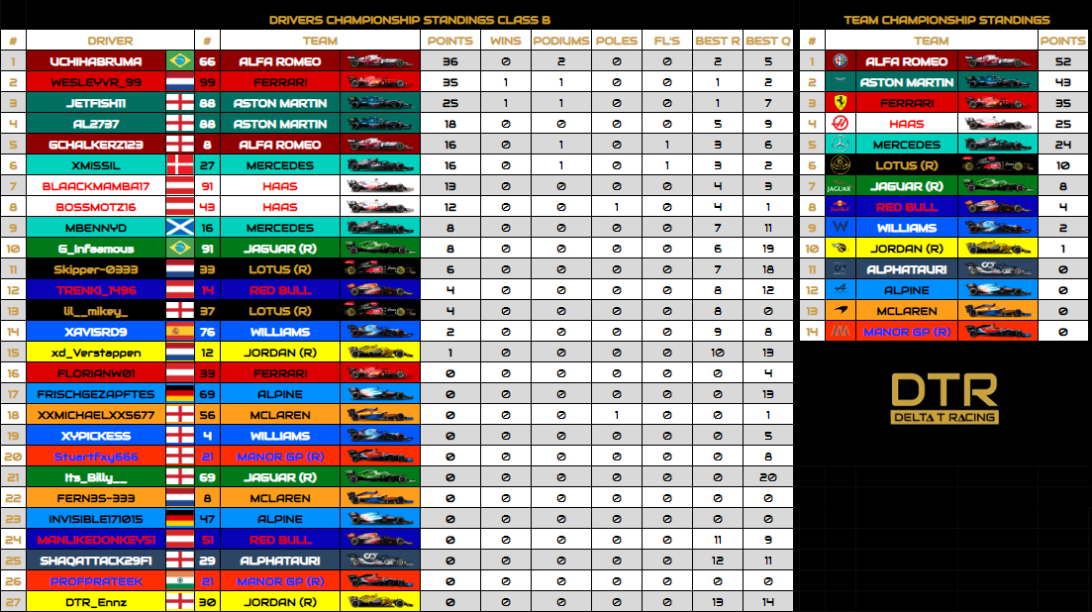 In the third tier of DTR it has been a Williams show so far. In Albert Park Nellboy was dominant with pole and fastest lap, but unlucky circumstances with contact with another driver and a safety car at the wrong moment got him behind his teammate Annihilator. They managed to get a Williams 1-2, which has been a long time ago. Third in Australia was lil__mikey who drove his Aston Martin to a podium position just ahead of Ennz, while Skipper binned it on the very last corner of the race, but still got 5th thanks to many non finishers in the season opener.

In Japan it was Annihilator again who won the race, but later got that taken away due a penalty given by the steward. Lucky man was lil__mikey who was already very happy to have scored two podiums, but got a bonus here with a win. Ferrari duo Stuart and Billy, who looked strong once again now did manage to finish the race and got 3rd and 4th, ahead of new drivers Brandonn and Dopeyman. With those two drivers added to the grid this Class C is a very competitive one and with many drivers able to go for race wins. With Brandonn being a multiple sim racing champion, experience and skill is added to the group and he’ll be a threat for the championship this season. And with him partnered up with Dopeyman, they could even fight for a constructors title. 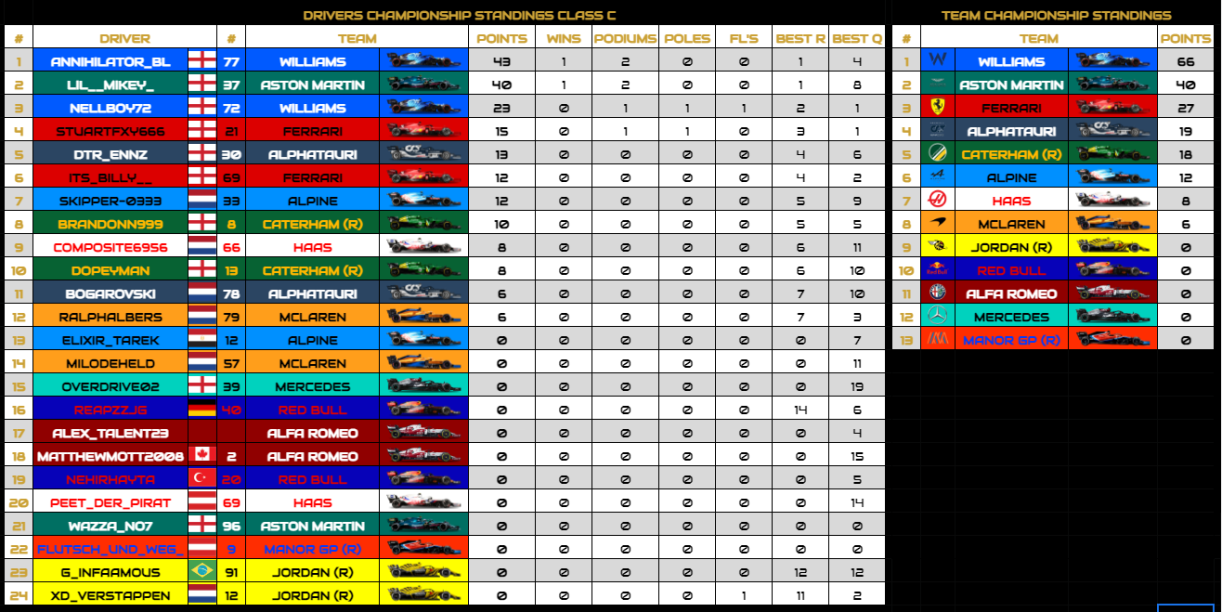 Now with round 3 this week at Singapore, there are a few questions:
– Who will stop the dominance of Justasas?
– Will the Red Bulls finally finish a race in Class A?
– Can xMissil take revenge for his loss at round 2?
– Who will beat the Williams in Class C
– And maybe most anticipated, with Wazza returning to the grid, can he keep up with teammate lil__mikey or possibly do even better?

All answers will be there on track.

See you out there