For the ninth round of the championship the team went to Monza, Italy. With Justas back on track he could score some important points to secure his championship, which almost seemed like a forgone conclusion a few races ago. However, with the Lithuanian driver missing a few rounds the title is slowly not much of a certainty anymore. Shaby is slowly coming back into the fight and even Brent still has a slight chance if he keeps scoring podiums. In Monza however everything went a bit different than planned. For everyone. A few series of unfortunate events made sure there wasn’t much of a grid left, which made the stewards decide to red flag the race. For a moment Swiss-Brazilian driver Bruma thought he had won, but time penalties kept him off his first win at DTR, which now went to Wesley, ahead of TenCaate and Tikkuhd. Even though only half points were awarded, a win is a win.

In the tenth round once again Justas was unavailable to drive for McLaren, which opened up the chances for everyone else. And in a race with constantly changing weather, safety cars coming in and out it was a race where anyone who made the right choice could win. It was Famrodpri who seemed to win after he made the right call by going to intermediate tyres on the last safety car period, but on the very last corner he and Shaby went side by, with the latter winning the drag race to the finish line. Xavi completed the podium just ahead of Stravoulis and Brent, which made the championship anything but a certainty now. Shaby is only 12 points behind Justas with just two more races to go. Brent seems almost certain to finish third in the championship and earn a ticket to the champions race. 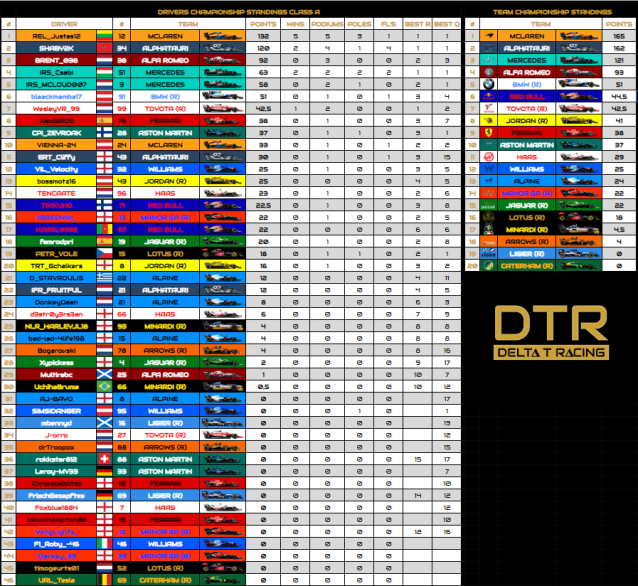 At Monza the drivers of the Ferrari powered team hoped to score a podium or even a win if possible, on their home ground. Even though many of them were in the running for a podium position, this was a race full of incidents and safety cars throwing the order upside down many times. And when Blaackmamba pitted on the last safety car for fresh softs he thought i’m in a great position to win it now, but since he was the only car pitting he lost a lot of positions, putting him back to 9th place with just a few laps to go. To help you understand how crazy this race was, on the last two laps there were so many incidents that Blaackmamba still managed to win this race, the first for the Austrian driver. After the stewards had gone through all reports, Svanhorzen and Nexton received a trophy for their 2nd and 3rd place as well.

At Spa there was much more at stake. If turned into his favor Wesley could clinch the championship here. He started off by taking pole position and lead for most of the race. He even was the first to cross the finish line, but a time penalty placed him back into fourth in a four man battle with Michael, Chalkerz and Bruma. The latter was bold enough to not pit at all in this rain race. While everyone else pitted halfway through the race for fresh inters he stayed out and took the lead. While his lead shrunk and shrunk each lap he still managed to hold on with just less than a second the group behind him and that gave the Swiss-Brazilian his first win and kept his championship hopes alive, while he and his Alfa Romeo teammate Chalkerz almost have the constructors title in their bag. Wesley however, may not be champion yet, but he is the driver to have secured a ticket to the champions race at the end of the season.

In Monza the fastest driver was not the one who won the race. Ennz was quickest in qualifying, fastest on race pace, but luck wasn’t on his side and it wasn’t the first time this season. Under a safety car situation another driver hit him, giving him a 5 second time penalty, which made sure he had to serve that under his next pit stop. This made sure he came out back in traffic as the field was all bunched up together. Being in traffic one of the Alfa Romeo drivers made a huge error causing Ennz to retire. Meanwhile the rain had come down on track and those who made the right tyre choice benefited enormously from that. However many driver errors during those last few laps caused a lot of cars not being able to finish the race, giving Ferrari a 1-2 at home.

In Spa those Ferrari’s started off phenomenally by starting both from the front row. Once again the weather had a huge influence on the outcome of the race. As usual Spa can surprise you with it’s ever changing weather conditions. This time however, when it started raining, it never stopped, in fact within the time of 30 seconds the track was completely wet and undrivable on dry tyres. Those who came into the pit lane directly to stop for wet tyres benefitted hugely. The driver who adapted best in these conditions was xd_verstappen and claimed his first ever win, but with a name like that we almost have to win races, right? As the Ferrari’s still both scored a podium finish and BeniBunno keeps struggling to find his early season form back the championship fight has now turned into a 2 man – 2 team fight. Williams and Ferrari are fighting for both titles, with BeniBunno and Billy fighting for the drivers championship, while their teammates Nellboy and Stuart are both still in 3rd and 4th in the championship. And both 2nd drivers may be out of the drivers title fight, the fight for 3rd continues as does the fight for the constructors title. That third position gives a ticket to the season finale named the champions race, but so does winning the constructors title, where the gap between those two teams is only 1 point.

The Monza Grand Prix had seen many incident filled races earlier this week in other tiers and this Class was no exception to that. With Safety car after Safety Car and crash after crash it was TyresThurso who came out as the winner in the end, but that was only after the stewards were ready handing out time penalties to many drivers for their contributions to the on-track incidents. For the young Scotsman that doesn’t matter as he’s the first proud Scottish race winner at DTR.

The race at Spa-francorchamps was finally a race without big or many incidents in this league. Although there were still some crashes, spins and drivers not finishing, it was finally a race that was about racing and not about who copes well with all the safety car situations. A race decided on pure merit was won by the driver who is undoubtedly  the fastest driver in Class D, New Zealand’s proud Beattienutz. In a battle with Eoindunne he proved to be the best in the Belgian Grand Prix, while Akeilos completed the podium by going for a one stop strategy. The race winner now has a comfortable lead in the championship of 24 points ahead of his Irish championship rival Eoindunne. Behind him it’s all open for those podium spots. But when looking at the constructors standings it’s the Alfa Romeo team that leads. The two brothers Relliot and Gooner are not winning races, in fact both only have just one podium finish so far, but with them both scoring top 6 finishes each race they’re the most consistent team of all and that could win them a title. The Ferrari team is close behind, but they’re mostly carried by just one driver, the championship leader. It’s most likely the tickets to the championship race will be decided on the very last few laps of this season. 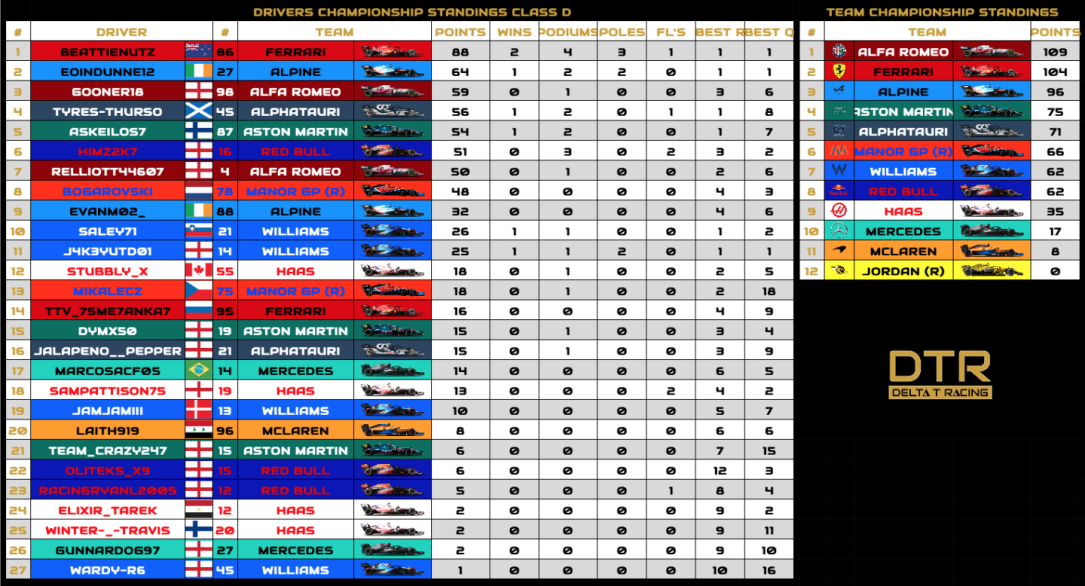 2 more races left this season, Brazil and Mexico with title fights heating up. And not just title fights, there’s more at stake. Everyone wants to compete in the champions race at the end of the season,. Each driver that finishes in the top 3 of their championship or wins the constructors title will get a ticket. So will we see performing at their best now the pressure is really on? Go watch the drivers live on YouTube next week!