Round 11 was a week with the penultimate races of the season. A week where all championships could have been decided. In all four leagues the stakes were high, but only 1 driver and 1 team clinched the title with one round to go. Let’s go around the leagues and see what happened and who is still in the running for a top finish.

It may sound a bit weird, but it was actually the first time this season VER_Justas12 was beaten on track. When the safety car came out on track the Lithuanian chose to pit for hard tyres and stick with them to the end. While his race rivals Shaby2k and URL_Tesla went for a different strategy that paid off and were finally able to beat this monster. In the championship Justas still has a ten point lead over Shaby, which means that any podium finish in the last race will get him the title. You may think, if he’s only been beaten on track once this season, how come he isn’t champion yet? Well, he was unable to attend a few races and one other race was red flagged. Shaby has been there all season and always been close to his rival, but never ahead in the race result. Next week, he needs to gain 11 points to become the first champion of the highest class in DTR.

For the constructors title it’s basically the same, but closer. It’s a 1 point gap in favor of Justas’ McLaren team over Shaby’s AlphaTauri. Both their teammates are unavailable so it comes down to these two phenomenal drivers who wins it. It also means both are qualified for the Champions race, just like Brent, who will finish in 3rd place this season. He hasn’t won a single race, but scored several podiums and has been very consistent. Worth mentioning he was only a few tenths away from a win in Austria.

To sum it up shortly, Justas,  Shabby and Brent will represent Class A in the champions race. 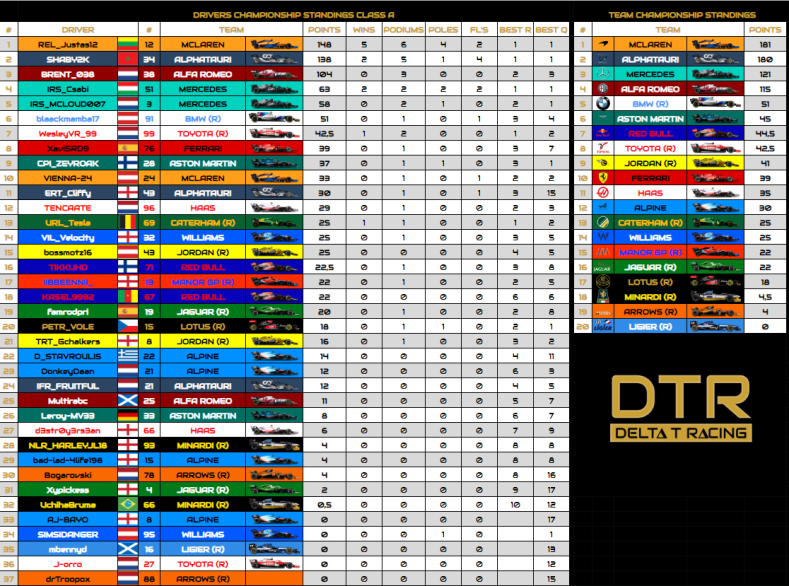 The two drivers fighting for the title here are Wesley and Bruma. Both are not the fastest drivers of this league, but most consistent by far. Who was the fastest? Probably Michael and Missil, but both were not there each race, or were unfortunate enough to DNF. Brazil seemed to become another win for Michael, but his choice not to pit under a late safety car made sure Invisible took his very first win. The German driver made his entrance just a few races ago and has been on fire ever since. He was unlucky at Monza, made a big impression in Spa, but Brazil was his moment of glory. A driver who surely will be a force next season. Just behind the podium the championship contenders got in a heated battle with each other, with a collision in turn 1 as a result. Wesley spun round, had damage and had to pit, losing out on many valuable points while Bruma was able to recover to fifth place. Wesley still holds a 14 point lead over the Swiss-Brazilian, which means in any situation a fourth place finish will be enough for the title, while Bruma needs a miracle to get the title himself. For third place Michael and GChalkerz are in a fight of their own with the first to have a 5 point lead over the other. Technically Blaackmamba could still finish 3rd, but he’d need a win and fastest lap and a no score from the others. It may seem impossible, but in racing anything can happen until you’ve reached the finish line. The constructors title is however claimed by Alfa Romeo, that means that Bruma and GChalkerz are the first ever winners of a trophy at DTR.

The tickets for Class B will be taken by Wesley, Bruma, GChalkerz and possibly Michael, if he manages to finish 3rd. 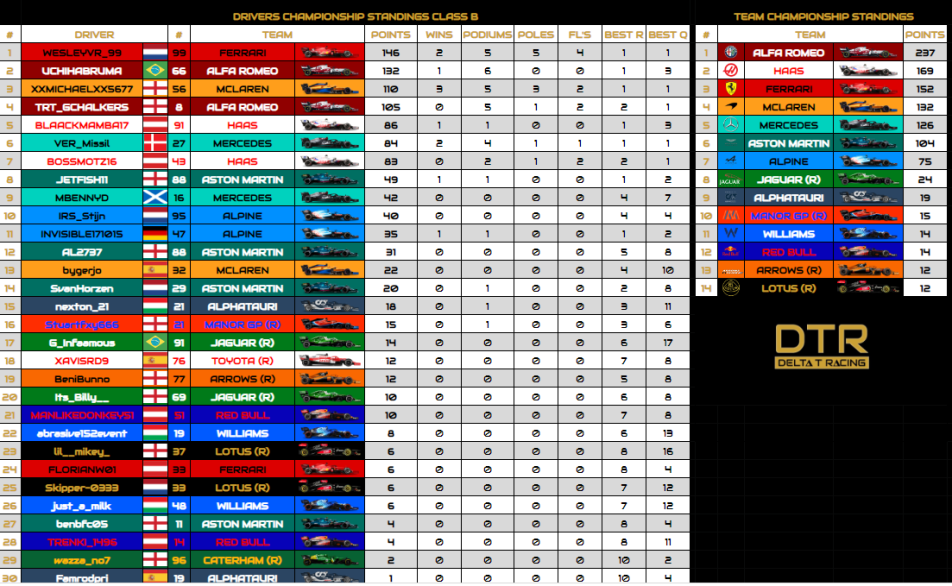 Ever since the first race of the season BeniBunno has been leading the championship. His rivals have however been able to close the gap in the championship lately and a poor race result in Brazil really brought him into trouble. The race itself was led by multiple drivers, but each time when you thought the leader was going to win he did something to mess it up. Stuart, XD_Verstappen, Wazza and Ennz all binned at some point, basically handing the win to Brandonn, who happily took his 3rd win of the season. With Billy finishing in second place, he has now taken over the lead of the championship and it’s just him and BeniBunno fighting for the title, while the battle for the third and final ticket will be between Brandonn and Stuart. Nellboy and Wazza still have a slight chance to finish in 3rd, but will need a win and a DNF from the others. For the Constructors it’s a fight between Williams (BeniBunno and Nellboy) and Ferarri (Billy and Stuart), with Ferrari taking a 16 point lead after Brazil.

The tickets to the Championship race will go to Billy and BeniBunno, but at least one of Stuart, Brandonn and Nellboy will be there too. 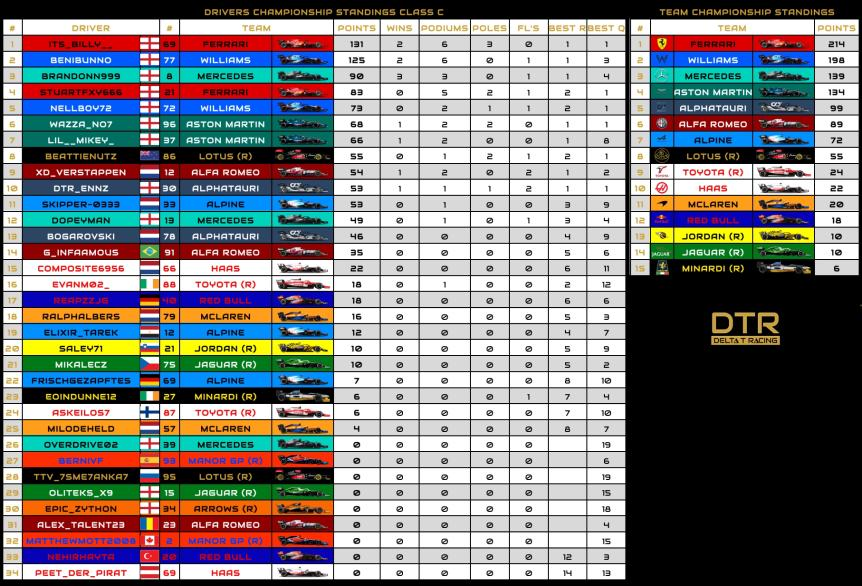 This league has been dominated by one man, even though he was always closely followed by one other and it wasn’t any different in Brazil. Championship leader Beattienutz led from start to finish, while his rival Eoindunne somehow managed to spin under a safety car. This put him at the back of the field, but an impressive recovery race brought him to the podium, taking 3rd place right behind Saley. This meant that New Zealand’s proud Beattienutz clinched the title and even took the lead with his team in the Constructors championship.

Irish driver Eoidunne holds a 13 point lead for second place over Tyres-Thurso and Askeilos and 16 points over Gooner. Relliot and Himz are not completely out of the race for 3rd, but will need at least a second place finish in the finale to have a chance to finish 3rd.

For the teams it has become an intense fight as well. Alfa Romeo (Gooner and Relliot) were leading the standings, but a poor result from both in Brazil had put them down in third place. Both Ferrari (Beattienutz and Smetanka) and Alpine (Eoindunne and EvanM) are ahead of them now, but the gaps are close. Any team with a good point score in Mexico could clinch that title, even Aston Martin (Askeilos and Dymx) could win it with a 1-2 finish.

The tickets? Well Beattienutz is guaranteed and Eoindunne looks like he’ll be there as well, but a bad last race could ruin it all for him. There’s still at least five drivers that have a chance as well.

With one more round to go it will become a real Mexican showdown for the titles and tickets of the Champions race. 9 drivers have qualified and there are still 11 tickets to be earned. Make sure you watch it all live on our channels next week!