Last, but definitely not least, the fifth division of Delta T Racing.

So let’s have a look: 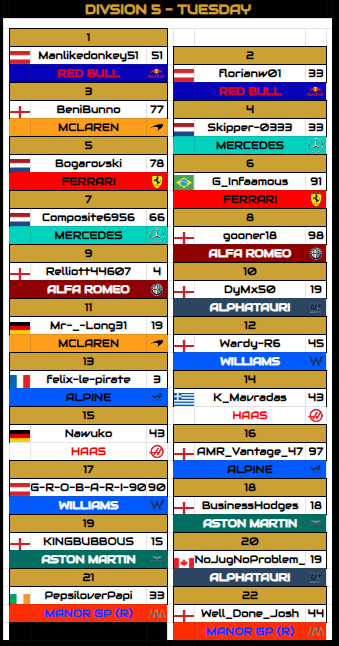 Alfa Romeo has re-signed their constructors championship winning drivers of Relliot and Gooner of Season 1’s Class D. The brothers were known for their ability to maximize their race results and going for a reversed strategy after mostly poor quali’s. It brought them many top 5 finishes and a few podiums. That consistency got them the title and now the brothers seem to have upgraded their qualifying speed as well. During preseason they looked quick over one lap. This may help them do even better than they did last season. If they manage to have the same consistency, they could win another trophy.

A British Canadian lineup of Dymx and NoJugNoProblem The first did fairly well in his few races in Class D last season while his teammate is making his debut. Showed some good racing during rookie races and preseason, but both are not expected to score big this season. It’s mainly about getting experience.

Quite a combination here. Felix-Le-Pirate is reasonably fast and is improving each race. The French driver could surprise on his good days if he manages to stay out of trouble. His teammate is still very unproven. Can be quick, but hasn’t shown much yet in the races he did. It will mostly be a challenge to stay out of trouble and finish races. If he does, he’ll score some valuable points.

The Silverstone team has two homegrown youngsters. Still very raw, but talented. BusinessHodges and Kingbubbous are exactly what I mentioned in my opening, two rookies that will improve massively during the season. Once they do, it’s the question of how good they can become.

Some teams have clearly chosen a lineup of raw talent, Ferrari went to old ways, choosing experience over young talent. These two drivers, Dutch driver Bogarovski and Brazilian Infaamous combined, have about 400 races on their names. Loads of trophies and podium finishes, but never have they won an F1 race. They did so in other series, even won titles, but these two ‘oldies’ are still hungry. They know they will not win this on pure merit, but their experience will get them many point finishes and possibly some podiums. Just like Alfa Romeo, they could, if it all works out, be a contender for the constructors title.

A German-Greek combination. Nawuko and K_Mavradas. Both entered the league late last season and showed some good things. The German driver is expected to have a good run and could possibly end up very high in the standings. His teammate could do well too, but is perhaps a bit lower in the learning curve. For now, that is.

BeniBunno and MrLong. Beni was leading the championship of Class C last season with two races to go. Some unlucky races threw away a certain looking championship. His ability to adapt to race situations is like no one else, as we’ve seen a few times before. He showed that in Singapore and even twice during preseason last week. In all three occasions he was brave enough to choose a strategy different or earlier than others under the safety car and come out on top every time. Is ready for revenge and clearly one of the favorites for the title. His teammate, German driver Mr Long has talent and is improving quickly. He will score big points regularly this season and combined with his high scoring teammate this is a team that will fight for the constructors title.

The oldest lineup by far. This driver duo has a combined age of 125. Oh yes, you have read that correctly. These two could be your grandad. And you know what’s funny, they’ll beat your ass on track whenever they have the chance. Just like the Ferrari drivers, they are not the fastest on pure pace, but have a mountain of experience and know how to finish races. You’ll see them scoring points every race and in some races even on the podium. So do not think Skipper and Composite are two oldies who you’re going to beat easily, because they’ve been around for a while and they’re here to stay.

An Austrian team with two Austrian drivers. Florian and Manlikedonkey. This team is the clear favorite to win. Not just races, but all championships. On pure pace Florian is probably the quickest driver of Division 5, but he’s coming off a horrible season where everything went wrong. Even when he was looking for a podium among great drivers, there was still somehow something happening that caused him to DNF or be in trouble. This season may be his time to shine. His teammate didn’t have a much better season. He did score a few more points than his current teammate, but Florian seems to be the quicker driver. If they can stay out of trouble it will be really hard for any other team to beat the Red Bull’s.

The team from Grove has a relatively inexperienced lineup. Wardy and G-R-0-B-A-R-I is an Enligh-Austrian combination that is very promising, but also very raw. The Englishman made his debut late last season and did fine, while teammate still has some speed to gain before he can start fighting for the points.

As first reserves we’ve got Pepsiloverpapi from Ireland and Well_Done_Josh from England. Both rookies have a steep learning curve ahead and will certainly improve massively over the season. Which will be needed to score good points and keep Manor away from a bottom finish.

That brings us to the end of this series, make sure you watch us live this season and let’s see how far off i actually was in a few Months from now.