This league has been dominated by one driver, Justas from Lithuania. Every race he started he won. Unfortunately for him he was unable to attend in the next two races, which gave his rivals the chance to shine and gain points in the championship in which he had a huge lead.

In round 7 in Baku, Petr_Vole took pole position just ahead of Wesley, with Chalkerz and Shaby on the second row. On the tricky circuit of Baku it’s usually a matter of survival and making the right calls on strategy once there’s a safety car on track. We sure did see a lot of safety cars and the one was not only making the right calls, but also the quickest driver of the day was Shaby, taking his first ever win in DTR. Wesley got himself another podium as he keeps scoring them one after another and in third Velocity made a brilliant debut with third in a race full of events and just ten finishers.

In round 8 Shaby was hoping to close the gap to the leader even more, but he put himself in a difficult position after being awarded a 5 place grid penalty. Despite having home advantage in Zandvoort he was unable to take his second win in a row as Hungarian driver Csaby took his second victory of the season, ahead of Dutch-Moroccan driver Shaby and Brent, who keeps scoring good points each race which has him in third position in the championship. A position that at the end of the season will get him a ticket into the Champions race.

The next race Justas will be back and is he able to terminate all competition again and make it 6 out of 6? We will see if he will in Monza. 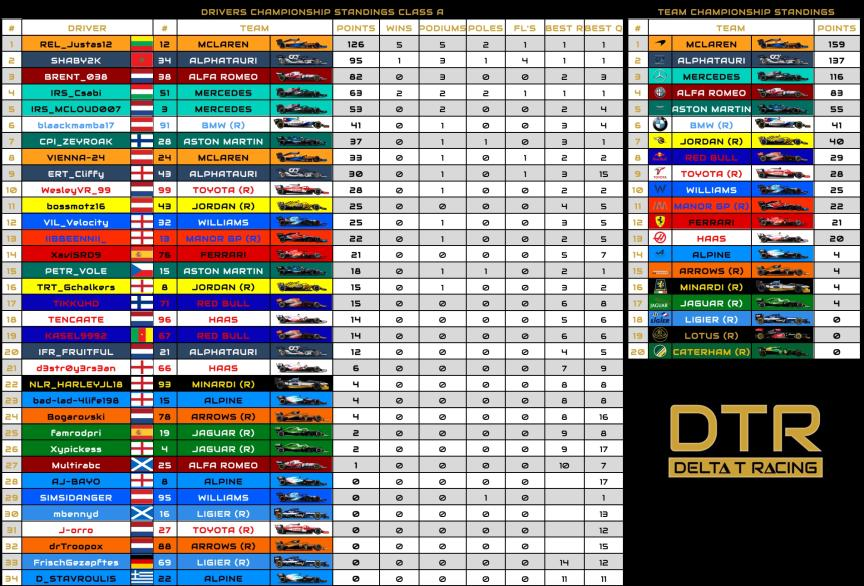 In the second tier of DTR there are two drivers dominating the pace. Together they scored 75 percent of all pole positions and seemed to be the quickest in race pace too. This however doesn’t mean they are leading the championship or are winning all races. In fact, Wesley is leading the championship quite comfortably. And you know why? Consistency. What? Consistency! He has never finished lower than 5 and has been on the podium in nearly every race and even won in Suzuka when he outsmarted everyone else during a late safety car period. At Baku however it wasn’t Wesley because he was smarter or more consistent than anyone else, he was just better than the rest with Bruma and Stuart completing the podium.

With an even bigger lead Wesley went to the beach at home in Zandvoort hoping to win his home grand prix and he started off with the best qualifying position you can think of, pole. In a crazy race where it started drizzling halfway everyone was sliding all over the place while one driver kept pushing and pushing as if he was the only driver on a dry track. The difficult conditions made victim after victim, but Michael was on fire like never before. A true masterclass had him win the race with nearly a lap ahead of the other podium finishers. Who were they? One of them was Bossmotz, who took revenge after his Austrian dramatic race ending and the other was, who else but Wesley. I’m going to say this one more time so you all will never forget. Consistency wins championships. 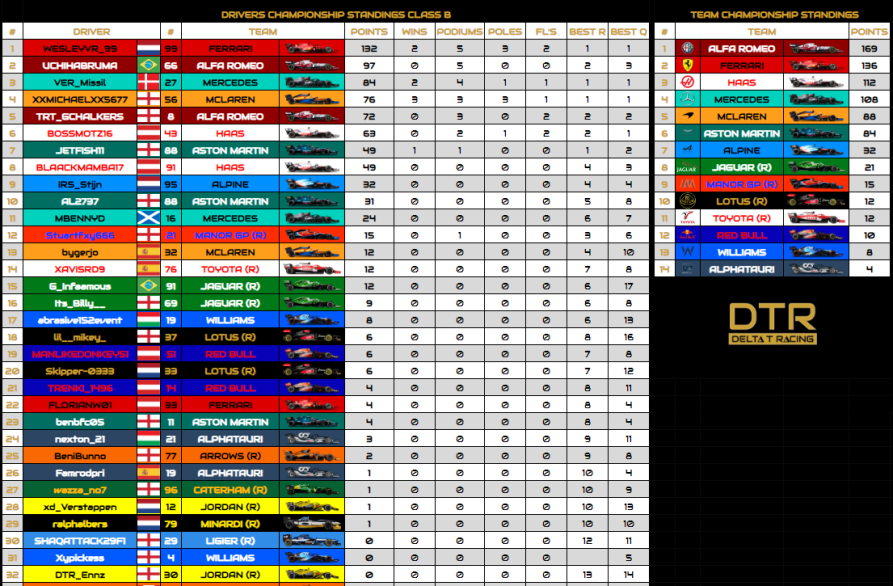 The streets of Baku always make victims. And in Class C saw many of them. In a race full of Safety Cars it was not all about pace. Strategy came into play big time. The drivers of AlphaTauri did that best with EnnZ picking up his first win after many unlucky races earlier, while team Bogarovski nearly made it a double podium, finishing only 2 tenths outside of it after a drag race to the finish line with Skipper.

In Zandvoort the AlphaTauri’s hoped to repeat a podium finish, but that didn’t go quite as planned for them. For once Wazza was able to keep his car on the black stuff and because the winner of Baku, Ennz, made more mistakes than he’d like to have made Wazza was able to take home the win for Aston Martin ahead of EvanM and Dopeyman, who scored some valuable points for the Mercedes team.

As you may have noticed I haven’t mentioned anything about the Williams drivers so far, while they have been dominating this league so far. The reason for that is because they scored more penalty points in these past two races than points in the championship. They’re still 1-2 and still leading the constructors Championship quite comfortably, but the rest is closing in. It’s going to be a tough fight for all positions in these last four races. 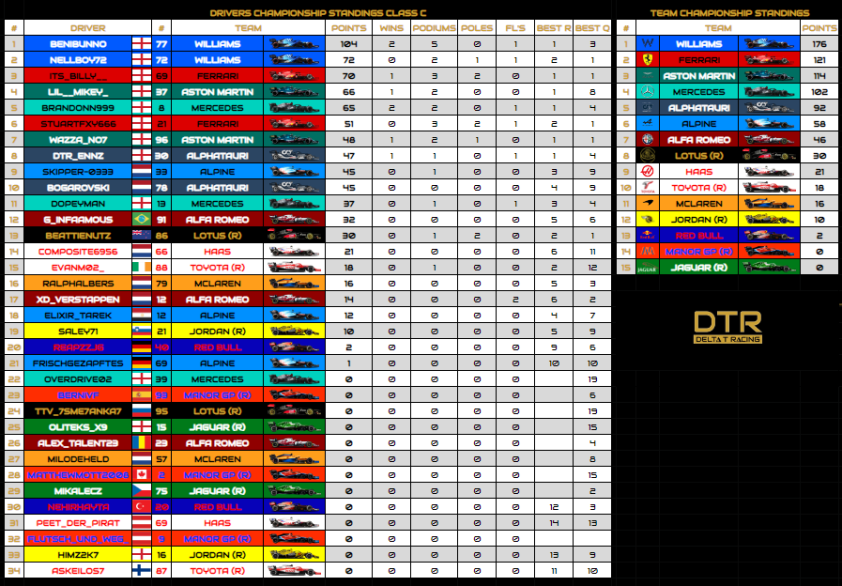 As you’ve been able to read above, Baku forms a big challenge for all drivers. It’s a big challenge not to damage your wing on one of the walls or especially in the Castle section. Imagine how that is when it’s raining on this track. The last few laps it was raining, but not hard enough for any driver to pit for intermediate tyres. Some wish they would have done so as the track became slippier and slippier each second. It resulted in a surprising podium with Askeilos taking home the biggest trophy to Finland, while Scottish youngster Tyres-Thurso was very close to beating him. Himz2K secured another podium helping him hugely in his title fight.

At Zandvoort this league has seen the craziest races of them all. A massive crash in lap 2 marked a ‘DNF’ for 9 cars. Probably the biggest car ending crash this league has had so far. After the mess was cleared and the rain was gone we had Bogarovski and Tyres-Thurso fighting in an epic battle for the win until the race got red flagged due technical issues. After the restart both drivers who were fighting for the win earlier still kept fighting each other, only this time for 8th position after both being in trouble at the restart. When the sun started shining in Zandvoort it was Saley who won ahead of Beattienutz who finally shook loose of his bad demons that kept him from winning more. In third position DyMx50 scored a podium on his debut. With a different winner in each race so far the championship is still very tight and reminds us a bit of the 1982 F1 World Championship where Keke Rosberg (father of…) won the big prize with just one race win. With just 15 points separating the leader and the driver in seventh place still anything can happen with four races to go.

Next up round 9 at Monza, Italy.