Division 1 kicked off season 3 this Tuesday night with three main candidates for the title, last season’s top three, namely title defender Shaby, runner up Chalkers and Jari. The latter may even be the biggest favourite of all with the recent pace he has shown.

Of course there are outsiders like Wesley and Prins and a whole bunch of drivers that can win on any given day, like Blackmamba, Trocker, Bossmotz, Invisible and perhaps a few more are capable of that and than i’m not even including regular reserves like Brent, DonkeyDaan or Tencaate, who are all very quick drivers, but for a title you need consistent podium finishes and that’s something only a few are capable of in my opinion.

Right before Quali started we had a last minute return to the grid from a real sim-racing veteran, a driver who has participated in perhaps more than 500 races in his sim-racing career, and not without success, the Swiss-Brazilian Bruma, who was eager to race on the Jeddah track as a replacement for one of the regular drivers. Unfortunately for him he was only able to set the 18th quickest time in qualifying. Who was the fastest man over one lap? Dutch driver Jari had 1:26.775, which meant a new DTR Quali record on this track.

In second position it was Chalkers who completed the front row, ahead of Prins and LTrocker, with Shaby just in 5th, just ahead of his team mate.

When the red lights went out it didn’t take long before we had our first retirement of the race, it was Invisible, who may as well change his name to Unlucky given his fair share of bad luck he often has. A DNF on lap 1.

Jari immediately took control of the race and started building a lead with a group of four drivers fighting for the other podium positions. The group lead by Prins further consisted of Shaby, Chalkers and LTrocker. A situation that lasted until lap 6 when DonkeyDaan retired and a safety car came out right when Jari had just passed the start finish line. Most other cars were keen to make a pit stop and go for fresh tyres. Due to Jari being held up by the SC all others basically had a free pit stop. Jari however did decide to come in for fresh tyres and that dropped him from the lead to 11th position in the race. The only driver not pitting was Spanish driver Xavi who inherited the lead with his reversed strategy.

When DyMx’retiremnt in lap 10 caused another safety car situation the Spaniard pitted and now Prins was leading ahead of LTrocker, Livingwall and Floran. Jari and his rival Shaby meanwhile were in 5th and 6th position, while Chalkers found himself in trouble and had dropped back to 13th. After the restart the audience were treated to an incredible three man fight between Prins, LTrocker and Jari who kept changing positions often leaving the commentator in awe with their racing. Right when Shaby had closed the gap to the frontrunners in lap 19 Chalkers hit the wall and was out of the race, causing another safety car situation. With from the leading group only Prins pitting for fresh soft tyres a new interesting situation occured, a restart with just a few laps to go and four leaders on old medium tyres and a whole contingent of drivers behind them on fresh softs. Just four laps to go and this (see picture) is the situation: 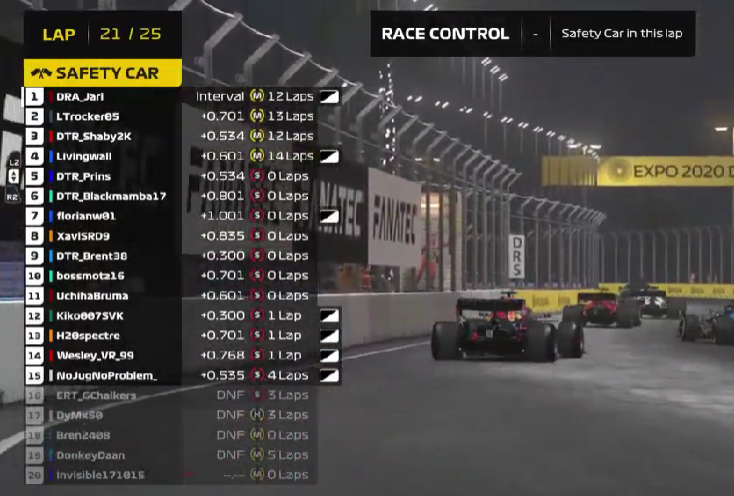 A situation looking very promising for Prins and Blackmamba, especially with both of them having no time penalties. As expected it didn’t take long before Prins was able to move up the field after the restart, with the passing of Livingwall within half a lap. With just two laps to go Prins had moved up to second position while Blackmamba was unable to get ahead of the well defending Shaby. On the last lap LTrocker, Shaby and Blackmamba all fought side by side for the podium positions with a drag race to the finish line between the first two. 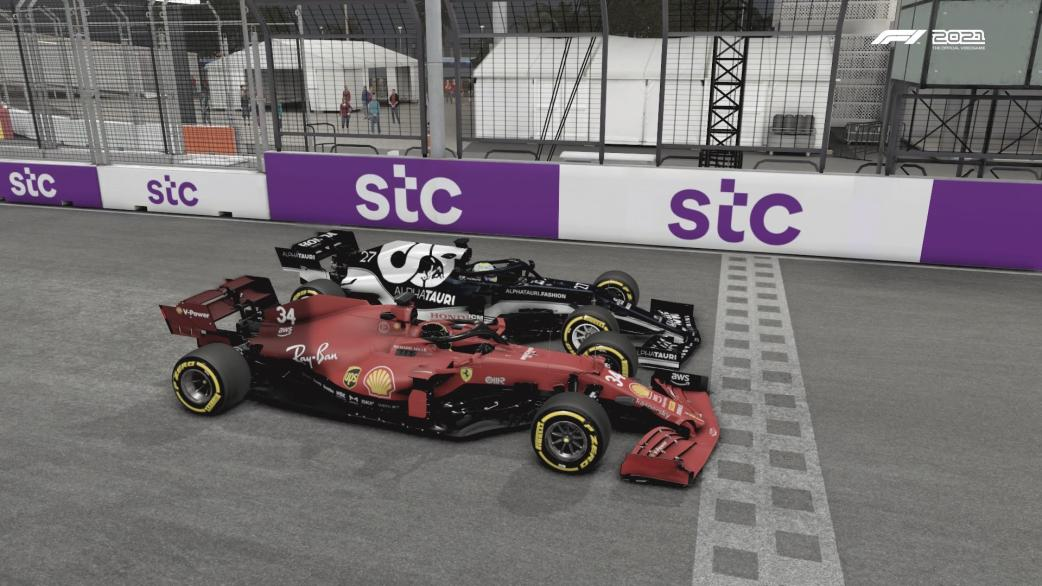 Although Jari did cross the finish line in first, his time penalty cost him the victory as Prins had none and may call himself the first race winner of the season, also giving him the lead in the championship.

The time penalty for Jari even made sure he completely fell off the podium, making room for LTrocker and Shaby. Below are the results.

Young canadian talent NoJugNoProblem managed to get his first point of the season in his debut, so a good state for the Haas driver.

With race 1 behind us we will go to Bahrain next week where Jari will hope to get his revenge and Chalkers will try to get back in the race for the championship.

See you in Bahrain!