For round 5 the Class A drivers went to Austria to compete on the ultra fast track of the Red Bull Ring. The paddock was buzzing when the drivers got the news that championship leader Justas wasn’t around, so everyone else was thinking they’d finally have a chance to be on the top spot of the podium. That battle for p1 started in qualifying between Hungarian driver Csabi and Shaby, Wesley and Blaackmamba, who wanted to score big on home ground. In the race it was a 2 man fight however between Csabi and Shaby, that got ended because a backmarker returned to track unsafely and took Shaby with him, which unfortunately for him meant he had to retire. As Csabi seemed to cruise to an easy win a late safety car and time penalty made it actually closer than anyone expected. Brent closed in very late and only came up 1 tenth short for his first ever win, while Cliffy took the last podium spot.

In round 6 at Silverstone Justas returned and showed who’s boss in Class A. Although ZeyroAK took pole, the Lituanian was on the front row while qualifying on harder compound tyres than anyone else. When the safety car came out on lap 6 he switched to soft tyres while everyone else reversed that or stayed out. With the laps counting down during the race everyone thought Justas would still make that pit stop for fresh tyres, but he surprised everyone by staying out and going for a 20 lap stint on softs. Win number 5 for him. Behind him Mcloud and Chalkerz completed the podium while championship rival Shaby was unable to make up fully for a failed quali and finished just in 6th.

Despite missing one race Justas has a big lead over everyone else in the championship, but that fight for p2 and p3 and the tickets to the champions race is in full swing 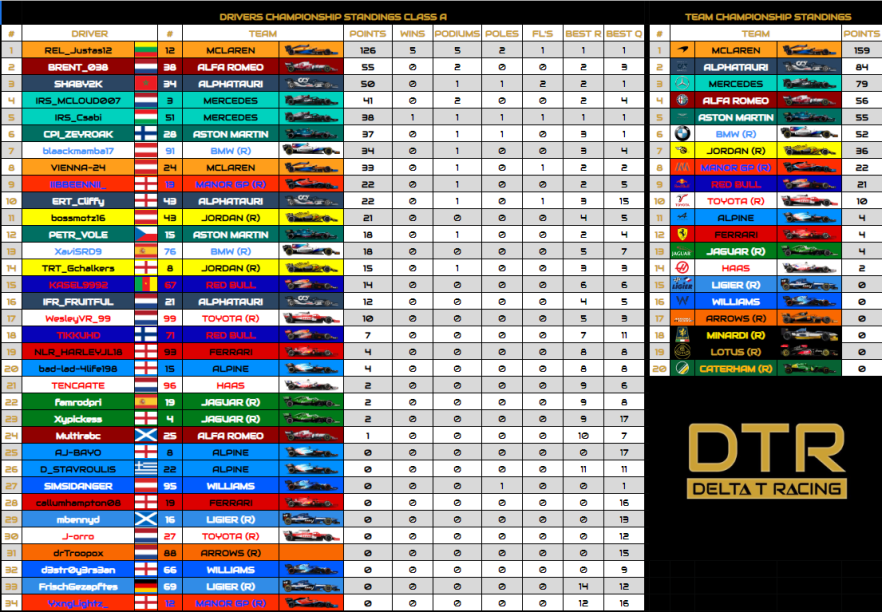 Round 5 at Austria was the return of Missil to the grid after missing the last race at Bahrain. And he surely did show some rocket power at this race. He took pole by three tenths on this very short track and despite a mistake early on that put him into last position he managed to work his way through the field on a day where no one seemed to manage to stay out of trouble. On the last lap of the race he had to battle Austrian driver Bossmotz and after going side by side corner after corner, the home driver was just a little too much on the kerbs of turn 8 and spun off. With him in the gravel the path was free for Missil to take his second win of the season, while Bossmotz did not even get a point, while having an amazing race. The Alfa Romeo duo of Chalkerz and Bruma did a great job by getting a double podium, which they inherited after Bossmotz’ team mate Blaackmamba got robbed from it because of a penalty. Championship leader Wesley got himself another good points score with a fifth place.

One week later at Silverstone Michael returned to the grid after missing two races and he and Missil made sure everyone else was just driving for 3rd place at best. An intense battle between the two race leaders was decided by a 3 second time penalty that Missil got for exceeding track limits. Although finishing first, the win was for Michael, who moved up to 4th in the championship. In the race itself Bossmotz took revenge for the week before and awarded himself with a podium finish ahead of Wesley, who once again showed his incredible consistency. Do I have to mention another bad luck race for one of the HAAS drivers? Blaackmamba once again was unlucky with having damage while under the safety car, ending his chances on a podium finish. Despite his very good pace this season has been full of unlucky moments with double stacks, poorly timed safety cars, other cars hitting him and on and on . Despite all that he’s still in 8th position in the championship is not that far away from a top ranking.

The third highest league at DTR is a bit of an odd mix of drivers. Most have experience of multiple years of league, some even have multiple sim racing championships on their name, while some others have never seen a track in their life before and the age variance runs from 12 to 66, so it’s fair to say it’s a mixed bag. Despite all that there’s 2 certainties in Class C.

1) Stuart will bin it

2) Wazza will do something to throw away a race.

The first of them managed to mess up while leading and spinning on a straight and the latter of them finally seemed to prove me wrong and win while starting from pole. If only for Billy. The young, but experienced British driver went for a very late lunge at turn 4 on the last lap of the race that was on the edge of what was allowable, but if only Wazza had defended the inside of that corner he would have held the biggest trophy in the air. Behind them the two Williams drivers BeniBunno and Nellboy scored important points for both their title hopes and constructors title.

A week later Stuart was joined by his teammate in trying everything they can to make sure to not win races. One spun on the last corner and took multiple cars out, the other managed to get disqualified under a safety car period. The Ferrari duo could have led the constructors championship by miles, but thanks to all their shenanigans it’s actually Williams leading comfortably.

The race win itself was another one for Mercedes driver Brandonn who is working his way up in the championship. Already in second position despite a slow season start, but still quite a bit behind BeniBunno who just keeps scoring podium finishes. And despite being just fourth, it’s very likely  he will inherit the third spot after the stewards have penalized Elixir Tarek, who despite his good pace was involved in multiple incidents on track. Oh and in second place? New Zealands’ proud Beattienutz made his Class C debut and nearly even won. This is surely a driver who can climb the ranks quickly. 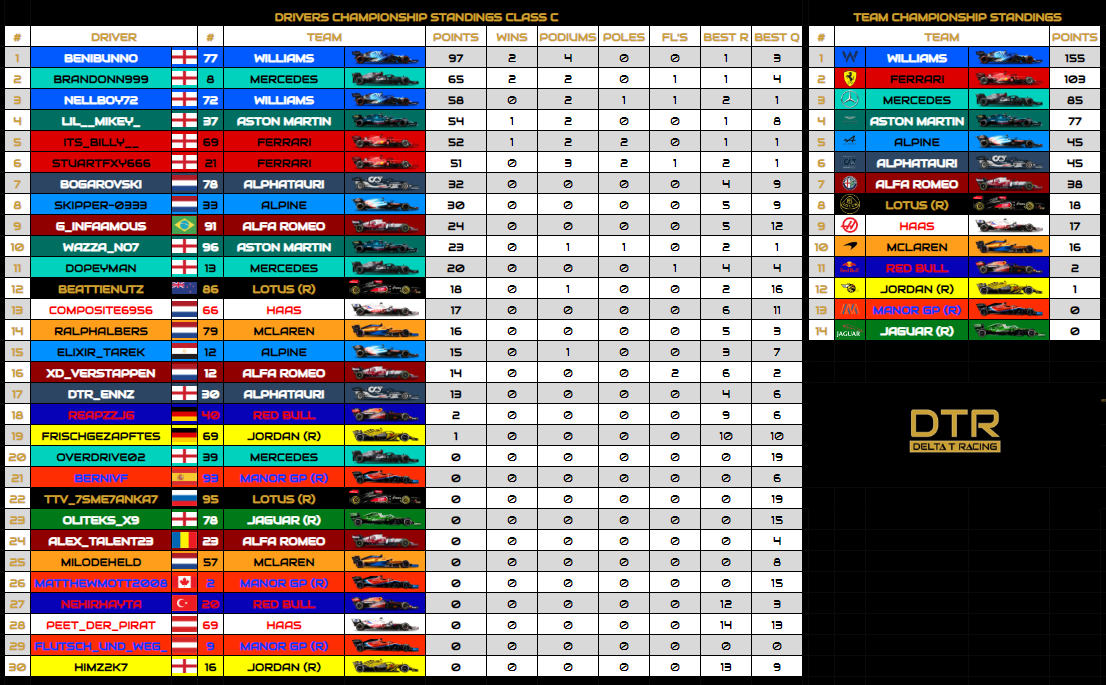 For Class D Austria was only the second race of the season, but it surely was one to remember. There were many incidents, unlucky moments and a constant change of race leader. The leading position seemed to be cursed throughout the race as we’ve seen six different drivers who had the lead making either a mistake, being hit, or getting disqualified. Disqualified? Yes, overtaking the safety car, even just for a brief moment, is not allowed.

Nearly as memorable was Bogarovski thinking he finally was going to win an online F1 race after being involved in over 250 GP’s, but then taking just a little too much kerb on turn 1 with just four laps to go. Ouch! In the end, after all the dust was gone and all penalties were applied it was EoinDunne taking his first ever win ahead of the amazing steady Alfa Romeo duo of Relliot and Gooner. Although just brothers they race like a siamese twin. Always close to each other and in nearly the same quali and race positions.

At Silverstone  the Class D grid saw some new drivers and MikaleCZ did a very impressive last to first challenge on his debut! The Czech driver was helped a bit by safety cars and other incidents, but still did a great job while keeping it cool. In second place was Jakey who finally managed to stay out of trouble and was very close to a first win. Himz2K scored a second podium of the season and thanks to some bad luck to rival Beattienutz took the lead in the championship. The battle for fourth place was a very intense one, with 6 drivers fighting for it, but on the second to last lap a big incident took 5 cars out of the running freeing the path for Sampattison and Askeilos, who both scored big points too on their debut.

With the season half way the drivers will go to Azerbaijan next week before they will go to the beach at Zandvoort. See you there!