For round 3 we went to Singapore and what the Class A drivers gave us there was an epic 4-man fight. Shaby took pole ahead of Vienna and Chalkers, but championship leader Justas crashed during quali and had to start from the back. That did allow him to start on a softer tyre compound for the race and when an early safety car came out and most drivers came in to change their softs tyre to medium or hard, the Lithuanian driver was already back in the game. McLoud, teammate Vienna and Shaby gave it all they had but once again Justas showed he is currently the best driver in DTR. After a late mistake by Vienna the podium was filled by Shaby and Mcloud, ahead of iron man Blaackmamba.

In the fourth race of the season in Bahrain Justas made no mistakes in quali. He took his 2nd pole and shared the front row with teammate Vienna. Despite many different strategy choices by the top drivers it was once again Justas who took the win. Vienna took second, but the real fight was behind these guys. Zeyro AK got his first podium ahead of debutant Csabi. But if you want to see how battling on track should be done. AKA two drivers continuously overtaking each other time after time while still giving just enough room for the other and making the most out of each slipstream? I recommend you watch the youtube video from this race and watch Shaby2K and IRS_Mcloud007 from lap 24 to 28. What an epic battle these two drivers had. It was like an 8 minute advertisement for racing. All I can do is take my hat off for these drivers and applaud. What a show! Another new driver was Cliffy, who had a very good race with a seventh position and scored a bonus point by driving the fastest lap of the race.

The last time I wrote a race report I mentioned the Red Bull drivers. They had zero points and two DNF’s each. How have they done now? Well they both scored points in Singapore and managed to reach the finish line at Bahrain. Unfortunately for them it was just outside the points. But I’m sure Helmut Marko will be a lot happier than he was before.

That gives us the standings. Justas has a commanding lead after four wins in a row, but unfortunately is unable to race in the next one. This will make sure his rivals will be putting in more practice than ever knowing they have a bigger chance to be on that podium in Austria. But like a famous Austrian once said “He’ll be back”

The Class A standings 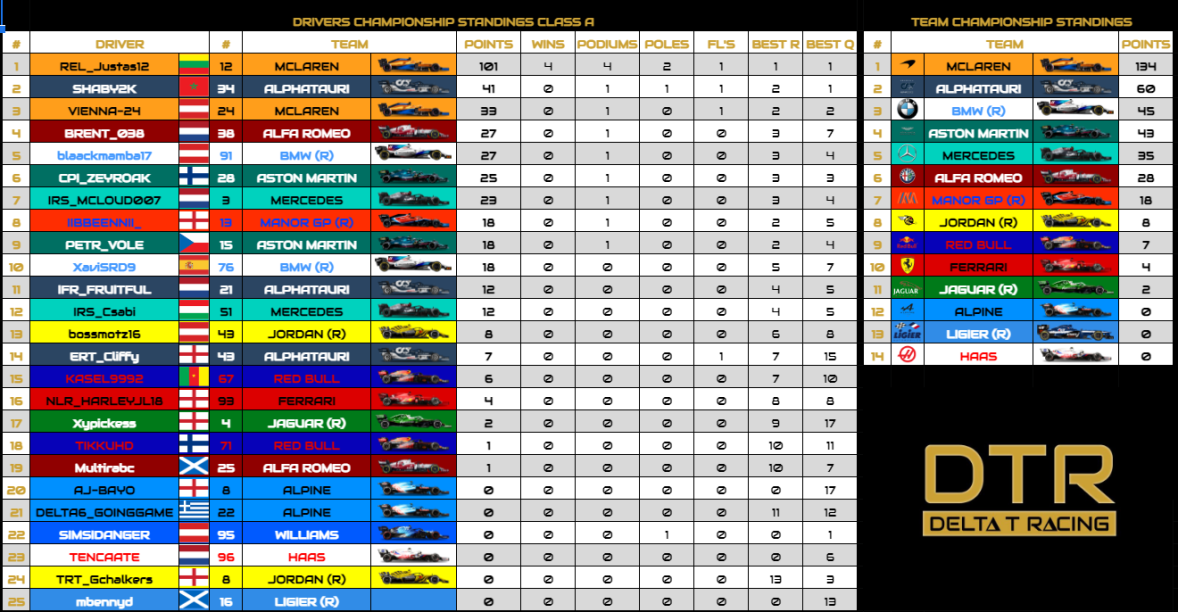 The second highest league in DTR is shaping up into a battle between a regular group of drivers that always perform and two drivers who are a complete hit-or-miss. The latter two drivers, named Missil and Michael, both won one of the last races. It was Missil in Singapore and Michael in Bahrain. However, given their inconsistency the championship battle is shaping up between those drivers who are always consistently getting top five finishes. Wesley has 3 podium finishes and never finished lower than fifth so far. That gives him the lead in the championship with 11 points ahead of Bruma, who just like Wesley had 3 podium finishes. Jetfish is in third position, with three good races and one off-result. The Haas duo of Blaackmamba and Bossmotz are always dangerous. They’re good enough to be on the podium and win races, but so far have been a bit unlucky in their races. They’re not that far behind in the championship, but do need a bit more luck to get in the fight. Bruma’s Alfa Romeo team mate Chalkers had a phenomenal race in Bahrain and was close to victory, but couldn’t hold off a surging Michael in the last few laps. However, his fifth place in the championship combined with the points of his team mate does give them the lead in the constructors championship and seeing their consistency, it may be tough for the others to beat them.

With a different winner in each race so far it will be interesting to see if that trend continues or if Missil and Michael can show their raw speed on a more consistent basis.

The Class B standings 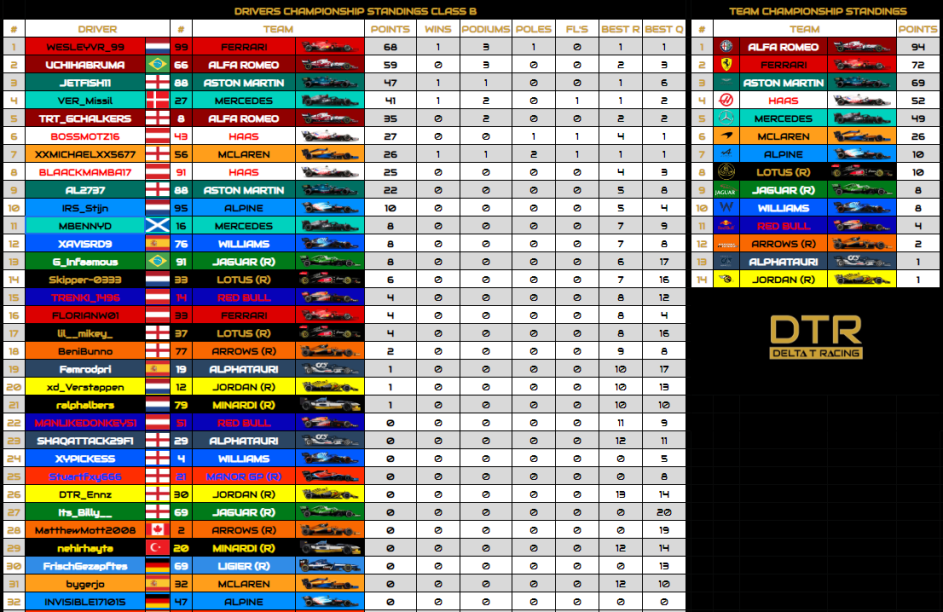 The third league of DTR has been a Williams party so far. They started off with a 1-2 in Australia, lost the win in Japan by a stewards decision, but won again in Singapore. It seemed like once again it would be Nellboy would be fighting for the race win once again on behalf of Wiliams. However a mistake by the Williams pit crew and a (in hindsight) brilliant call from the other WIlliams driver gave BenniBuno (formerly known as Annihilator) another win. What happened? Well he was brave enough to pit for soft tyres under the safety car while it was still raining and gambled that it would dry up quickly. It was a bold, but perfect call as once the safety car came in within a lap all other drivers had to pit, but BenniBuno could just cruise on to another win. His teammate Nellboy was heartbroken as he was probably the quickest man on track, but when he pitted for those soft tyres, his pit crew accidentally gave him another set of intermediates, forcing him to come in again after being overtaken by nearly the whole grid. It was a good day for Ferrari after all as both their drivers were on the podium. In the fourth race of the season we witnessed a clinical win by Brandonn who took his first win of the season, ahead of Nellboy, who made sure we’ve seen a Williams on the podium each race so far. It could have been a much better day for Ferrari if they had managed not to have ran into each other under the safety car. And Ericsson wasn’t even close! Behind Stuart who eventually still got third, Dopeyman and Infaamous had a very intense battle for a lap or ten, with Dopeyman coming out on top at the end. The Aston Martin team was only represented by one driver in Bahrain. Wazza once again showed his amazing raw speed, but a drive through penalty destroyed his chances of getting on the podium. His team mate Mikey will be back for the next race when we go to Austria. 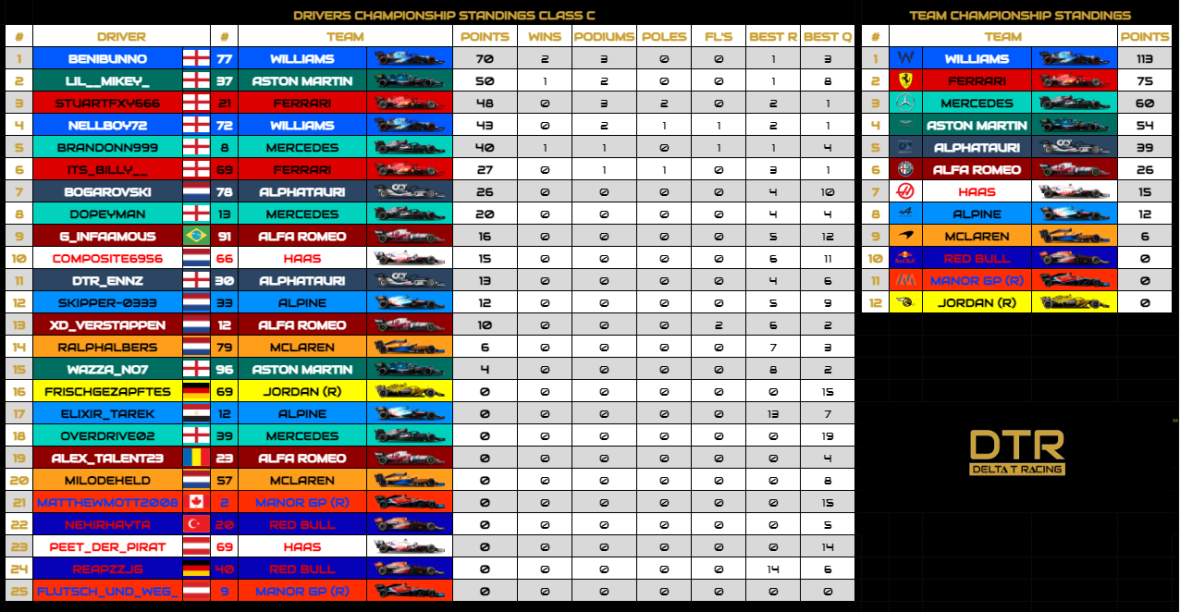 With the enormous growth this league has had and many drivers being promoted through the rookie program there were enough drivers to get a full grid together for a fourth division that had its first race in Bahrain.

For many of them it was their first ever league race, so a lot of nerves went through those drivers. In a very close battle for pole it was Irishmen Eoindunne who was quickest, with a time that would have placed him in fifth position on the Class C grid. Unfortunately for Eoindunne his lead didn’t last long. He had a great start, but lost the car at turn 13 and many positions with it. Once New Zealands’ Beattienutz got the lead he never looked back and took a commanding win over Stubbly_X and Himz2K. The one stop strategy did wonders for EvanMoran and the Alfa Romeo brothers Rooner and Relliot, giving them all good points on their first race. TikTok great Jamjammiii was involved in an early incident preventing him to fight for the podium, but still got fifth position in an impressive comeback race.
It’s hard to say who will be fighting for the championship after just one race, especially with so many talented drivers who are still improving each day, but this is not a group of slow drivers, these guys are the young and talented drivers of the future. Beware those of higher leagues, they are getting better and better each day and will take your seat when time has come.

In the next races we will go to Austria before we go to Silverstone. See you out there!