For round three the Division 1 drivers went to Melbourne, Australia. When quali started the biggest news was that the race would be in wet weather conditions. How heavy the rain would be is something nobody knew, but conditions were going to be tricky.

In quali it was once again a battle between Jari and the AlphaTauri drivers, the championship leader taking the pole, with a margin of four tenths on Chalkers and Trocker. A surprise on the second row was Boompje, a debutant in these series. Most disappointing in quali were Prins and Bossmotz, where the first made a mistake and folded his car into a wall, while the latter was probably busy picking out a cake for his upcoming birthday the next day, as he didn’t even set a time during the session.

All drivers chose to start the race on the intermediate tyres and even though there were no big incidents at the start, Boompje didn’t survive the final corner of the first lap, resulting in an early retirement. A few corners later it was DyMx50 who was the second driver of the race that retired due to a crash, resulting in a VSC. As we all know by now, staying under the delta in a VSC period is crucial to prevent getting an unnecessary Drive Through penalty. Spectre, iiBbEeNnii and NoJug were not aware enough and had to bite the bullet.

Not much later we had our third retirement on the day, this time it was Kiko who lost the car at turn 4. The incident triggered a full Safety Car this time and that meant that the drivers who had gotten a drive through penalty were not able to serve it until after the safety car period, as you are not allowed to serve it while the safety car being out on track. Luckily Ben had already served his penalty, making sure he wouldn’t lose any more time than he already did.

Some intense fights were going on in the early stages of the race, but for title defender Shaby that didn’t work out very well as he got damage fighting De Rooij, resulting in him pitting in lap 7 and being all the way at the back. With championship rival Jari leading the race, this was the worst possible scenario for the Dutch-Moroccan Driver.

On his fresh tyres he was immediately showing off a strong pace, but gaining time on the leaders is never easy when you end up behind other cars. And even though it normally is a bit easier to overtake in the rain, this track is one of the hardest on the calendar to overtake other drivers.

The race situation after 11 laps is as seen below: 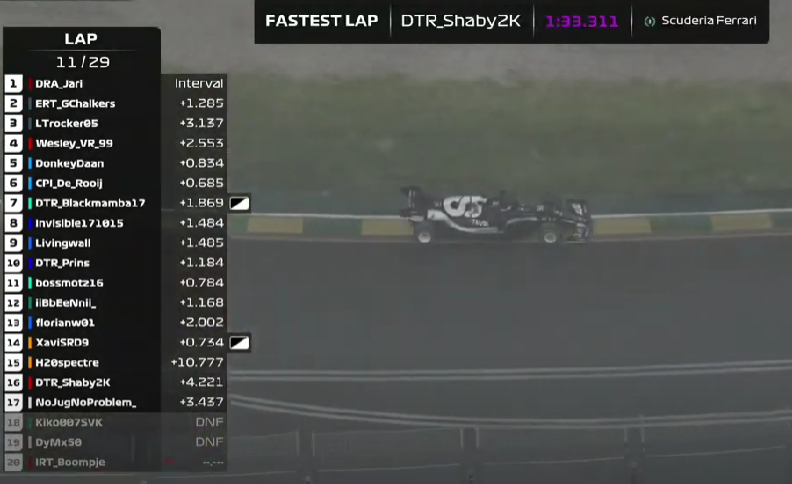 In lap 16 we got another safety car on track due to a crash from Blackmamba. The fourth retirement of the race. As this was about halfway through the race most drivers opted to pit for fresh tyres. The only ones who didn’t were De Rooij, who now inherited the lead, Prins (p3), Florian (p5) and Shaby (p9) who now finally had the possibility to move up the field after his early pit stop. No one has seen what happened, but during the safety car situation Invisible managed to crash at turn 3, making sure there were only 15 drivers left in the race.

One lap later, still under the safety car the race leader was trying to warm his tyres by swerving from left to right over the track, but just before turn 1 he did this with a bit too much enthusiasm, making sure he hit the wall and had to retire his car. Can you imagine? Leading the race under the SC and having to retire? Well it really happened.

So that left us with 14 drivers and once again Jari in the lead. Right? Right!

Well until half a lap later that is. The safety car was about to come in and Jari was leading the restart and just like De Rooij earlier, weaving on track to warm up his tyres. But just like De Rooij, he did it just a little bit too wild and went onto the grass of the penultimate corner.

Surely a lap that we will all remember for a long time! 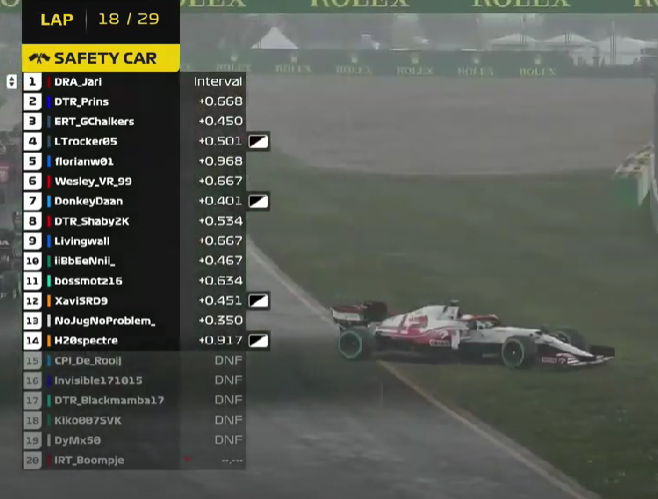 The incident caused quite a bit of chaos behind him, but the new leader was now Prins, who actually started in last position and still hasn’t made a pitstop yet. Six other drivers had damage due to the incident earlier and all had to pit for repairs. Due to the much older tyres Prins was no match for the AlphaTauri’s and Jari, moving him down to fourth place within a few laps.

On lap 23 NoJug had to retire his car and that meant that once again we had no Haas driver finishing the race. Xavi had to do the same after getting his car damaged in lap 27. Up front the AlphaTauri driver were leading the race, but time penalties for LTrocker and Jari would mean the podium was far from certain, as Shaby was now in fourth not far behind the leaders. In fact, with LTrockers’5 second and Jari’s 3 second penalty the Scotsman tumbled off the podium and Shaby even took second place. Something even he didn’t expect after being in last podium just 15 laps ago. In fifth position it was Prins who took the Alex Albon trophy home as he managed to finish the race without even pitting,

With GChalkers taking his first win of the season he is back in the race for the championship and we are up for a very good and intense battle this season.

Next week, Imola. The Italian race is going to be a special one, as we will have a sprint race to determine the grid order. Looking back at how preseason went, we could be up for a special treat.

See you all next week!